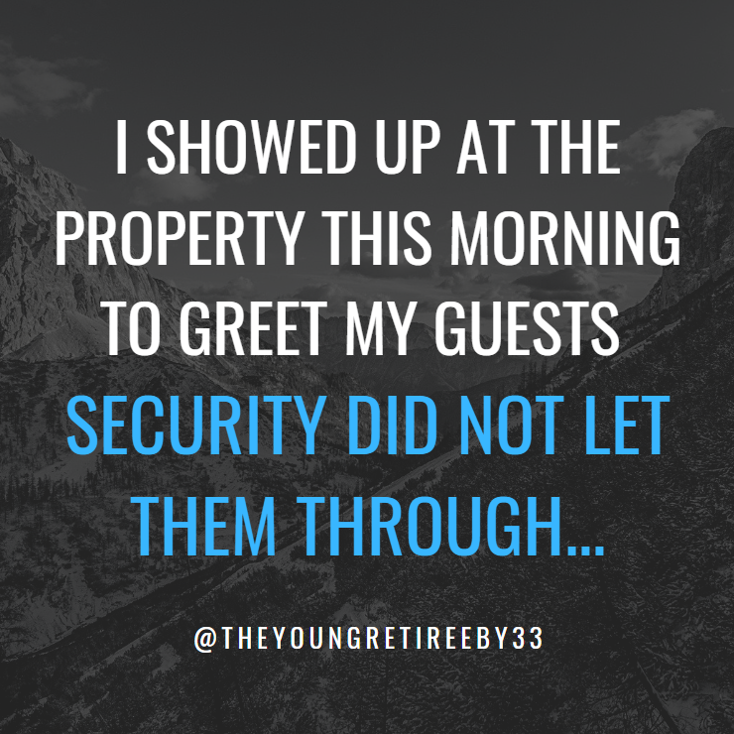 And so the saga continues. This morning, security turned the guests away at the front gate. I watched the whole thing from the inside of the gates.

If you haven’t already, read the first two parts of this story at the below links:

Ok, now let’s get into the latest update from Ol’ Faithful!

The Plan First Thing This Morning

Perfect. I brewed my morning cup of coffee from home and started to write an update for you all on the facebook messages that were being sent on the HOA page last night. After two hours of working to put everything together and post it, I was in my car off to my property.

Here was my thinking. I wanted to be inside the resort gates before my guest arrived so I could easily come out to the gate if there were any issues. I arrived at the gate around 10:20 am this morning. The guy who I normally see was working the security at the front gate. I waved my homeowners “entrance” paper so the guard would let me through.

I wanted to do one last confirmation that my guests would be allowed to check in. I asked the guard at the gate, “I have guests coming in 20-30 minutes. Just wanted to confirm they are going to be able to get in?”

The security guard confirmed they were on the list to be allowed in. SHWEEEET! I was good.

Time For The Fun

15 minutes later…I get a call from the guest. They are at the security gate and the security guard is not allowing them in! Umm…I literally just had a conversation with this kid and he said we were good.

I immediately called the front gate and asked what was going on. The security guard told me the onsite manager was speaking to my guest. I told him no worries, I will be there in three minutes. The guests ended up leaving before I got to the gate. More to come in tomorrow’s post about what happened with the guests.

So I start walking to the security gate. Calmly.

At The Security Gate…Here We Go

I arrive to the security gate and see Jose, the manager I have been very friendly with, walking towards me. I have talked with Jose many times and he was the guy who walked me through all the HOA documents after I closed on the property.

Jose proceeds to explain to me that the resort is not allowing any new guests into the community per the governor’s executive order.

For reference, you can read the executive order on short term rentals from the Florida governor here.

Feel free to take a minute to read the document. I am by no means a lawyer and I don’t want to be a lawyer, but I read Section A part i shown below:

Again, I am not a lawyer, but how would you read this?

I read Section A (i) as I can rent my previous vacation rental as long as the rental is for over 30 days or 1 calendar month, whichever is less.

This would mean, my guest who was at the gate trying to get in would be allowed in.

Back To The Conversation With Jose

One quick note, I made sure to stay speaking in a very calm voice with a smile the entire conversation with Jose. There was no reason for me to take my frustration out on him when he is just following guidance from his boss.

Back to the conversation with Jose. I asked Jose why new guests aren’t allowed to check in to the resort? He told me it was a decision made by the HOA and board to close down the resort.

Good deal. I asked Jose if he was aware of the executive order put in place allowing rentals of over 30 days? Jose was not aware, but he let me know it isn’t his job to know those things, his job is to simply ensure he abides by the guidance provided by the HOA president and board.

I can respect someone who doesn’t have authority to make an exception to defer to his leaders. I told Jose thanks for the conversation and here were my parting words to him, “Could you ask Conrad (the GM of the Resort) to call my cell per my request through email earlier this week on Thursday? And also, when you are on the phone with him, could you let him know I will filing a lawsuit tomorrow morning on the HOA and on him personally?”

Jose let me know he would be more than happy to deliver the message. I asked him to call me back once he got a hold of Conrad.

Fifteen minutes later, Jose called me back letting me know Conrad would not be reaching out to me, but the HOA stands firm that no new guests are allowed into the resort. I let Jose know that this is nothing personal and I appreciated him doing his job, but I would be suing the HOA and Conrad tomorrow (Monday).

Some would have asked, “Why not just let your guests get in and just give them a keycard to go through security?” Great question. In this community, there is only one entrance and one exit. The entrance has a 24 hour security guard. You either don’t have a keycard and have to stop at security, or you travel to the right and can swipe the card to get in the resort.

The crazy thing about this is owners are not allowed to have keycards. This was apparently decided at the last HOA meeting that I was not at. The residents who live in the community wanted “security” and felt if owners were allowed to have key cards that all of a sudden the community wouldn’t be safe. I brushed this off as not a big deal when they made that decision. I am now beginning to see how that was just one decision of many showing how ridiculous this HOA is.

This Is The Main Issue With The HOA

Here is the main issue that I just learned about this morning. Although 80% of the homes in the community are owned by investors, all the board members are homeowners who live in the community. That right there my friends, means 100% of the votes to make decisions are made by the 20% majority within the community.

Talk about jacked up. All good though. It is the current state. I am going to work to get on the board, after suing the board 🙂

Think it can’t get crazier?! Think again, checkout the next article below!