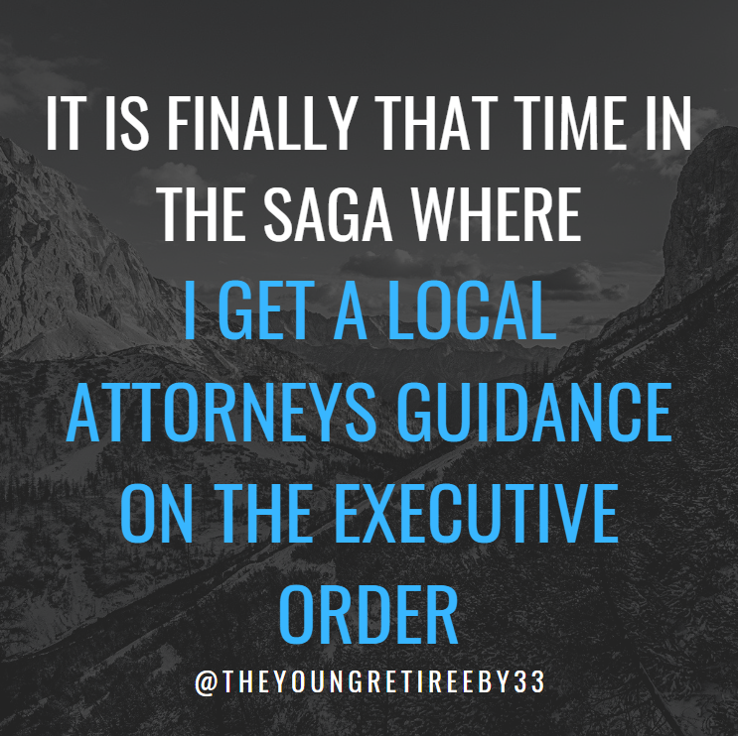 It is finally time for legal advice from a local Florida attorney. Late last week, I had the opportunity to have a friend’s wife quickly review the information and provide her interpretation. It is now time to get a local attorney who is very familiar with the Florida law to provide their interpretation and guidance.

Before hearing what the attorney had to say, if you haven’t had a chance to get caught up yet on everything going on, check the links below for the first 6 parts to the series!

Getting On The Phone With The Attorney

I had never spoken to an attorney before to talk through potential guidance on an Executive Order. Prior to speaking with the attorney, I had put together some information for my agent to pass along. I essentially put together a short summary of

How I Interpreted Section A(i)

I recently polled my followers on Instagram to see what their thoughts were for how they would interpret the Executive Order. This was more for fun than anything else. I am by no means a lawyer and I know that probably 99.9% of people who have been reading this are not lawyers, but I thought I would go ahead and poll anyways.

Time For The Lawyers Interpretation

Before explaining the Lawyers Interpretation of the law, I would like to say one thing. The lawyer read and re-read the Executive Order. Prior to going into her interpretation of the law she told me this. She said this was one of the worst written Executive Orders that she had ever seen the governor write and sign into law. More than likely, that was due to how quick they were trying to act to get something signed and put into law.

The biggest point of confusion she said is based off how the entire section reads. She stated there is an AND clause to begin point A which then constitutes the OR clauses to act as an AND clause in a sense.

I was so confused, I had to ask her to break it down for me in laymen terms. She talked me through the fact that the AND clause prior to the OR clauses makes it such that all the OR clauses have to be true in order for the exception to be okay based off the Executive Order.

Goodness gracious, even trying to explain it as I type this out right now I am confusing myself as to how to interpret it properly. I believe the correct interpretation is no new guests are allowed to check in because my place is a transient public lodging establishment, it has been rented out prior this year for less than 30 days, it is advertised to the public on Airbnb, and it is regulated by the Department of Business and Professional Regulation as a vacation rental pursuant to section 509.241. I believe since all of those had been true then I could not have anyone check in for the duration of the executive order.

Well S**T!! That Wasn’t The Answer I Expected

She again stated it was one of the worst Executive Orders she had seen written in a long time. She said it is extremely confusing and stated there is a lot more research they would have to do to confirm there are no holes in her initial interpretation, but it would cost $385 per hour to research further. The conversation ended up lasting 20 minutes and at the end of the conversation I asked for her advice to understand whether it was worth them doing the research.

The lawyer told me she would be more than happy to do further research to confirm her initial thoughts, but said she felt 80% confident my case wouldn’t hold up in court. Although hard to say, she said she agreed with the interpretation the HOA attorney had on the law.

Here is what Section B states in the Executive Order:

In my communication to the HOA and Board, I have only stated reference to Section A(i).

I asked for the lawyer to give me her interpretation of Section B and that is when she said she would be more than happy to do further research, but it would need to be on the clock to do a full interpretation of the case. At that point, I asked her what the best path forward was.

Overall Outcome Of Speaking With The Lawyer

Okay, so that didn’t go as I thought it would go. I thought I could read, but I clearly can’t interpret law based off my interpretation of this Executive Order. There has to be a way to pivot this in ways that wouldn’t consider this rental as a short term rental, I just need to figure out how to pivot properly based off the law. There is much more research I need to do and some clarity I need to get with reviewing the Bylaws of the HOA association on long term rentals.

This isn’t where things stop though. The story continues getting even juicier after the response back I sent to the HOA and Board this morning based off their response email yesterday’s article.

Just wait till you see this craziness. Got me fired up! More to come in the next couple of days.

Stay posted by subscribing to the blog and following me on Instagram!

Don’t worry, this is not where this story ends. I may have lost this battle, but we have not lost the war!

I have much more fun that has happened as of today. More posts coming over the next four days!

To check out the next part of this series, click the link below!

Part VIII: Ready To Pull My Hair Out On This HOA Issue! – But Time For A Political Response