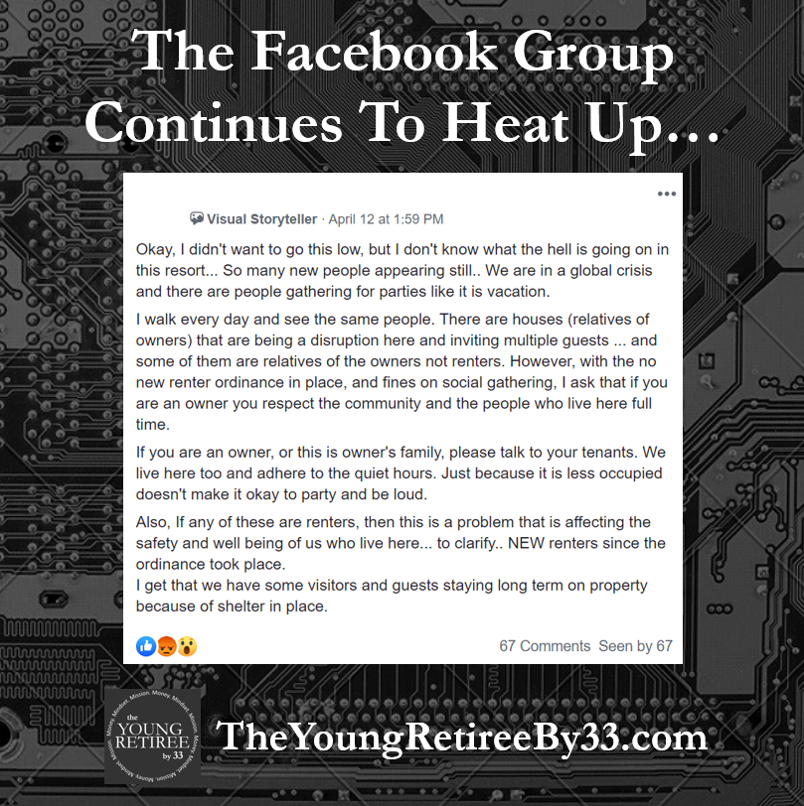 I honestly thought the HOA facebook group wasn’t going to have much more fun stuff to post about, but boy was I wrong. The below is a full unedited version of the conversation that spun up the other day in the Facebook homeowners group. The hilarious part of this story is the fact that the individual who spun it up was one of the individuals who complained about me wanting to rent my place long term. And now she had the nerve to make this comment, and it lit a flare and a lot of fiery conversation!

Before hopping into this incredible exchange on Facebook, get caught up on everything that is going on! If you haven’t caught up yet, start from the beginning of the story to get the full craziness of this saga with my HOA!

Time For The Fun!

The Message That Kicked Everything Off!

Now the fun shall begin!

First they begin complaining that the HOA turned off the lights at night at that was causing a large safety risk for the people who live onsite. Hmmm…interesting. Someone even mentioned they wondered what happened to the guests that arrived at the gate from my home. Since I haven’t posted anything in the FB group stating what happened, I am for sure certain people think I am still trying to force people in.

Now the accusations begin coming in with accusing homeowners for breaking guests in “illegally” to the resort. Again, it isn’t illegal. I am allowed to rent my place 30+ days. Period. And this stall that the HOA on is insane.

More accusations accusing homeowners in the resort who are investors whom are still renting out their homes.

Okay, this is where I have to step in. This lady who is the one who posted on the top of the above picture is full of s**** and the biggest hypocrite I think I have ever seen. So first she complains for people’s safety in the resort for having strangers come in and stay for extended periods of time.

The day after she said all that, someone reached out to me with a link to a Facebook group and told me to check it out. The link ended up taking me to a Garage Sale Facebook group in the Orlando area where this same lady had posted 5 things every day for the last two weeks to sell. Not only had she posted 5 things, but she was openly telling people where they could meet up to complete the sale of her crap.

Yeah, I laughed out loud for a good hour after I heard and read all that crap.

And now the head of the board weighs in. I lolled at this one as well.

I won’t even give me 2 cents as to the nonsense I just read over again. The way they are going about handling this situation is, pathetic.

Ok, there was my one comment above. I just couldn’t hold back anymore. My one and only comment in thread though! It was extremely hard to keep my fingers from hitting send on a few different comments I had queued up.

So that is where this part of the story ends, but my fight and battle with the HOA is not over yet!

In tomorrow’s post, I will post a few different back and forths I have had with the HOA now. These back and forths have been extremely frustrating to say the least and how they have handled responding to email has been horrible. 48 hour response times is not acceptable. They continue to try to just drag this out till they have to let me rent my place out because then the “ban” will be lifted.

More to come…don’t worry. This is not where the story ends!

Thanks again for all the support and continuing to come back each day for new updates in this saga!

Checkout the next part of this saga at the link below!